Barcelona’s Mediterranean climate is one of the city’s biggest attractions and plays a huge part in defining the lifestyle of its residents. The pleasant temperatures that grace the Catalan capital for many months of the year mean that the locals are able to spend a lot of time outdoors. In every neighbourhood you will see chairs and tables spilling out onto the pavement from the numerous cafés. With the sun making spirits high and drawing everyone out of their homes, you will be hard pushed to find a city as sociable as the Catalan capital.

How does the weather in Barcelona measure up?

Barcelona is less arid than southern Spain, but not as wet as in the more northern parts. The weather is generally predictable and the typical image of Barcelona with a clear sky and bright sunlight dowsing the blue sea and green mountains in a golden glow is largely correct – Barcelona enjoys 2,524 hours of sunshine a year (in northern Europe this figure usually sits around 1,500).

The average temperature in Barcelona 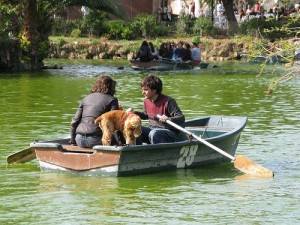 Spring is one of the best times to visit Barcelona as temperatures begin to heat up and are generally nice and warm. However, during these months the weather is less predictable so expect some showers, especially in April. But don’t let this put you off – outbursts are normally quite short and the sky soon clears, making way for the sunshine. 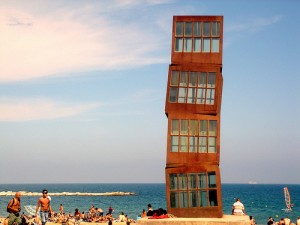 As summer is usually very hot and humid, it’s essential to wear light and comfortable clothing when out and about in the city. Consecutive days of bright sunshine provide the perfect excuse to head to the seaside, take a dip in the sea and dry off with a cool drink in hand. If you decide to visit Barcelona during this season, it’s a good idea to look for an apartment with a balcony or, even better, a terrace. 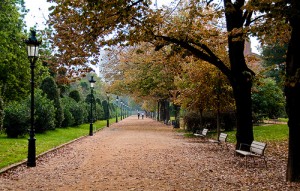 The sweltering temperatures of the summer begin to die down but are still warm and enjoyable, making it the perfect time to explore the city. However, like inspring, rain isn’t uncommon. So although beachwear is still essential, don’t forget to bring something waterproof as well.

The winters on Barcelona’s low coastal plain are relatively brief. However, during this short period temperatures at night can drop below freezing, so we’d recommend that you stay in accommodation with some form of heating. The chilly wind means that you should definitely pack a coat. Snow in Barcelona is an extremely rare sight and one which Barcelonans get very excited about.

Making the most of the sunny weather

Although this is one of the highest populated cities in Europe, its architecture is well adapted for the hot weather. If you look out over the city from a terrace, you will see many locals dining, socialising and relaxing on the rooftops.
If you don’t cope well with high temperatures, it’s a good idea to avoid spending the middle of the day in the labyrinth-like streets of the old town. Here the high buildings and narrow alleys trap in a lot of heat. Instead, visit this area in the early evening when it is cooler and the atmosphere is at its best.

The beaches in Barcelona are among the best urban beaches in the world although, as you can probably imagine, they’re often very crowded. Similarly, while there is an abundance of parkland, don’t count on finding a quiet patch of grass in parks like Parc de La Ciutadella.
With an average temperature of 20 degrees Celsius, and only 55 days of rain annually, Barcelona has an enviable climate, ensuring its coveted place as one of the best city break destinations in Europe.