Whatever the season, the weather is a popular topic of conversation in the Netherlands. The Dutch may have reason to complain, however, as the weather can be quite unpredictable. Thanks to its temperate North Sea climate, Amsterdam has pleasantly mild summers and cold, wet winters. Take a look at the seasonal overview below and find out what to expect during your trip to Amsterdam. 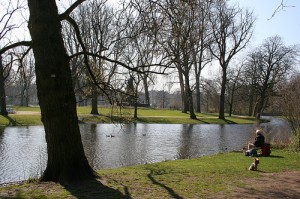 The crocuses are in bloom and the trees in Amsterdam Wood are coming to life, which can only mean one thing – spring’s arrived. The Dutch awake from their hibernation and there’s a lively atmosphere in the city. During springtime the weather in Amsterdam is quite unpredictable and changes on a daily basis. It’s probably a good idea to take an umbrella with you at all times as a rain shower may never be far away. To be sure you won’t get cold during a cloudy day, the best thing you can do is to dress in many layers. The occasional day can be greeted by some pleasant and warm sun spells and temperatures generally stay in the mid-teens – great for a bit of afternoon sightseeing!

Tip: a sunny day is the perfect occasion to enjoy an outdoor activity in the city. Rent a bike at one of the numerous bike rental offices and soak up some vitamin D while you cycle alongside Amsterdam’s canals.

Our tip if you require an official ESTA visa for your travel to the USA and are not making any progress with the application form: www.esta-registration.co.uk. 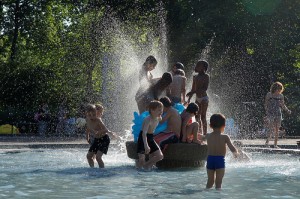 In the summer, the city hosts a wide range of festivities. Bars and outdoor seating areas are crowded with thirsty tourists and locals, and people casually cruise their boats along the Amsterdam canals. Temperatures can reach 25°C, which for some Dutch people is scorching! Even though most days are sunny during a Dutch summer, rainy or cloudy days are still an unfortunate (and regular) feature. Therefore, always check the weather forecast before leaving your umbrella at home.

Tip: prepare a picnic basket and head off to the Vondelpark to enjoy some sun among the locals and tourists. People lie on the grass, play music and games such as Frisbee and it’s a really relaxed place to be on a summer’s day. In June, July and August the Vondelpark Open Air Theatre stages productions from popular music events, dance shows and theatre. 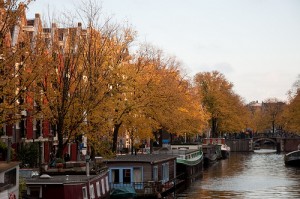 Green leaves make room for red, brown and yellow ones, making Amsterdam’s canals a real sight to behold. However, autumn is also the season that sees a lot of cloudy and windy days. The probability of prolonged rainfall is at its highest during the autumn, with an average amount of 100mm per month. Autumn is a great time to take a relaxing evening walk along the canal and enjoy the cosy atmosphere in the city.

Tip: in late August the cultural season has officially started, so head to some indoor cultural attractions. Admire Van Gogh’s Sunflowers during Museum Night or go to the International Documentary Festival Amsterdam (IDFA) in November. 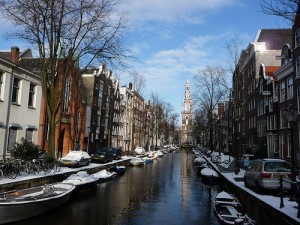 Winters in Amsterdam can be really cold and it’s not uncommon for temperatures to drop below zero. Every year Dutch people hope for a white Christmas, which is never really out of the realms of possibility as the Netherlands experiences an average of 18 snowy days a year. The sun only shines approximately two hours a day and the average temperature hovers around 4°C. Therefore, the best advice we can give so you can carry on sightseeing is to pack a scarf, thick gloves and a warm winter hat.

Tip: when it’s freezing, the natural ice is thick enough to skate on, so try out this popular Dutch sport on Amsterdam’s canals. Dress warmly and show off your ice skating skills to the locals. Visit a Dutch bar for a cup of hot chocolate with whipped cream to warm yourself up afterwards.

No matter which season you’re heading to the Dutch capital, Amsterdam is always alive. Each season the city hosts plenty of indoor and outdoor activities, so you never have to worry about getting bored during your holiday. Always remember to pack your umbrella, as you never know when a Dutch rain shower is around the corner! Veel plezier!