Berlin’s weather can sometimes be described as all seasons in one day. The city is generally considered to have a continental climate, but there are typically major seasonal fluctuations between the summer and winter time. If you’re planning a trip to Berlin we have compiled some handy information about the weather with advice on what to wear and information about what’s on in the different seasons.

How does the weather in Berlin measure up?

Berlin has a temperate Oceanic climate, giving it beautifully warm summers and festively chilly winters. The city experiences moderate levels of rainfall throughout the year, with light snow showers expected between December and March. Berlin also receives more hours of sunlight annually than the average for northern Europe, at 1,657 per year – 150 more than the average.

The average temperature in Berlin 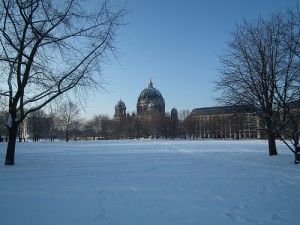 Winters in Berlin can be very cold, with temperatures frequently reaching freezing. Snow and ice can often cover the city for periods and winter temperatures can reach around minus 10 degrees or even colder. January and February are usually the coldest months. Respite can be found in spring which can start as early as April, although it typically makes an entrance a little later, ushering in bright skies and a cool yet but agreeable climate.

Tip: Berlin winters require dressing up warm, so scarves, hats, gloves and a warm coat are an essential requirement! Given the likelihood of snow and frost, you should make sure you pack adequate waterproof footwear for your winter trip. As the weather in Berlin can often include four seasons in one day, wearing a number of layers of clothing can be a good option. This way you can shed or don layers depending on the weather. 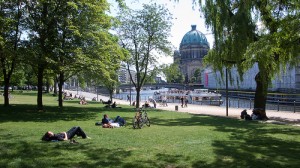 The start of spring and the summer months in Berlin can be very pleasant and this is the time when the city comes alive. Suddenly the streets become all about life outdoors. Although Berlin can experience the occasional heat wave, temperatures are characteristically warm at around 25ºC, which can prompt surprisingly balmy evenings right into the early hours.

There are numerous open-air events in the summer months including Fete de la Musique and CSD Berlin. Come September the city hosts the Berlin Marathon and Berlin Music Week. Be warned though Berlin summers can throw in the odd rainy days or even thunderstorms similar to tropical climates. Temperatures can change quickly from very warm to quite cold in the space of a day or two. In recent times the city has seen spectacular storms with lighting, thunder and torrential rain.

Tip: Typically for continental climates, temperatures can sometimes drop considerably in the late spring and summer evenings, so remember to take extra clothing for such an eventuality. Also an umbrella is always handy to take out with you to avoid getting caught in a downpour. 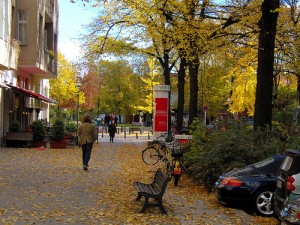 Autumn in Berlin can bring clear blue skies with temperatures still on the mild side, making for very pleasant weather conditions. Berlin is a green city with lots of parks which come to life in rich autumnal colours of browns, reds and yellows. Around November the temperatures start to become notably cooler, leading to December which can be one of the coldest months of the year. There are also plenty of year-round indoor activities ranging from lots of great museums and art galleries to sauna clubs.

Tip: Wrap up well in December and visit the popular Christmas markets. Drinking the famous delicious hot Glühwein is guaranteed to warm you up!