Seville is a typical Mediterranean city with the climate to match. It experiences blisteringly hot summers that send the locals away to the coast in their droves as well as pleasantly mild winters with plenty of sunshine. The best time to visit is either spring or autumn, when the café culture is still alive and kicking and the temperatures are around 20°C. Read on to discover what to pack when and the annual events in Seville to take advantage of. 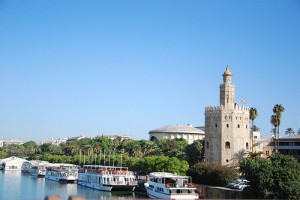 March can be a little rainy, but on the whole spring is a really pleasant time to be in Seville, especially as the temperatures start to creep up to the late 20s in May. Summer is in the air by April and people start venturing out on to the plazas and streets to soak up the rays and enjoy a morning coffee or evening cerveza. It’s an ideal time to visit, especially during Easter to see the elaborate religious parades or for the southern flamenco extravaganza, the Feria de Abril.

Seville holds the record for the hottest city in Europe with a record temperature of 50°C, so it’s no wonder that its summers can be uncomfortably hot. with figures rarely dipping below 30°C. In 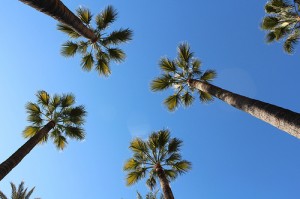 addition, the city all sees a great deal of sunshine – around 12 glorious hours a day. This might all sound perfect, but with an average high of 37°C, July and August are probably not the best months to visit Seville, as it can make sightseeing a bit of an ordeal. Rain is unsurprisingly non-existent from June onwards, so much so that in 2003, the city went four months without a drop of the stuff.

October has been known to be a rainy month, so make sure you pack an umbrella. That said, average temperatures are still around 20°C so chances are you’ll have a plenty of sunny, warm days when visiting. Nocturnal temperatures have decreased since August, making it possible once again to have a comfortable night’s sleep without air conditioning. Overall, this is a lovely time to visit, especially with the smaller crowds and more agreeable temperatures. 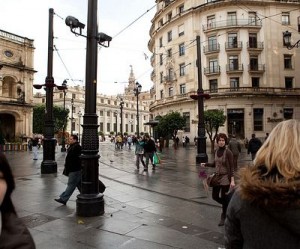 Temperatures drop considerably by December, which has an average low of 7°C. January is the coldest month of the year so make sure you pack your winter woollies. Nonetheless, temperatures rarely venture anywhere near freezing and compared to northern Europe, winters are mild – so much so that it hasn’t snowed in Seville for 50 years! December, January and February experience 8-10 days of brief yet heavy rain per month, so pack a brolly just in case.

Making the most of the weather in Seville

If you don’t cope well with high temperatures, seek shade in Seville’s spectacular Cathedral, which is not only the third-largest in the world, but in fact the resting place of Christopher Columbus.

It’s probably not the best idea to spend the middle of the day in the labyrinth-like streets of the Old Town, as the high buildings and narrow alleys trap in a lot of heat. Instead, why not enjoy a leisurely lunch in a shady spot or have a tasty ice-cream or cool drink in a street-side café?

Although Seville only has an average of 52 days a year with rainfall, if you do happen to be unfortunate enough to catch a shower, then don’t worry, as there’s still so much to do. Why not explore on of Seville’s numerous indoor food markets and pick up a few tasty morsels? Or discover the beautiful detail of the Real Alcázar de Sevilla or head to the Flamenco Museum and learn all there is to know about Spain’s most famous dance.

Whatever the weather, be it 15 or 35 degrees, Seville is a fantastic city break option with endless things to see, eat and do!