Head over to Claus in the 1st arrondissement for breakfast. It’s all about gourmet health here, with rich mueslis and vitamin-fuelled fresh juices. A ‘Claus Special’ breakfast includes the Claus-Made muesli, a soft-boiled egg with a selection of fresh breads, served with fresh juice and herbal tea, or coffee for those who can’t do without a caffeine kick-start in the mornings.

From Claus, take the Metro to the centre of the Marais district in the 3rd and 4th arrondissements. This is the oldest neighbourhood in Paris and therefore home to a number of buildings of historic importance. Make sure you have a look down the narrow rue de Montmorency and stop at number 51 – this is where the alchemist Nicolas Flamel used to live and is also the oldest house in Paris. 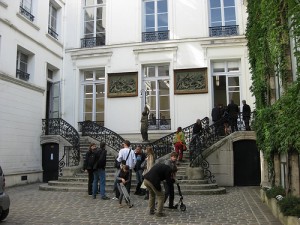 These days, Marais is a fashionable neighbourhood for artists and trendsetters and gives visitors a real insight into local culture and communities. Take a 2-hour walking tour run by Paris Walks to find out more stories and histories of the area. After the tour, pop into one of the small art galleries such as Galerie Perrotin, which has even held exhibitions by hip hop artists in the past. Fashion lovers will adore the vintage wares of Noir Kennedy on Rue du Roe de Sicile or Aux Comptoirs du Chineurs (‘the bargain hunter’s shop’) on Rue Saint-Paul, while K. Jacques on Rue Pavée is well-loved for its trendy summer sandals. If you want to do some craft shopping too, have a look in some of the many artisan boutiques or head over to Marché des Enfants Rouges, which is the oldest covered market in Paris.

Make sure you take advantage of one of the Marais district’s eclectic lunch options before you leave: Restaurant Derrière, for example, on Rue des Gravilliers, is one of the trendiest spots around. Accessed through an unmarked door to a courtyard (part of the thrill of the dining experience is actually finding the place), eating in Derrière is a bit like dining in a stranger’s home. The ‘living room’ has comfortable chairs, a CD collection and general clutter of someone’s home (although most people don’t have a table-tennis table in their living room) while the ‘bedroom’ has seating in the form of a bed mattress, while mirrored ceilings look down on you. The menu doesn’t disappoint either, with classic French dishes including Salad Niçoise and slow-cooked bourguignons.

Next, take the cable car (or walk if you’re feeling energetic) up the hill to the Basilique du Sacré-Coeur de Montmartre – the Roman Catholic church and basilica to mark the Sacred Heart of Jesus. It was constructed about 100 years ago and the towering site seems taller still, given the fact this is also the highest point of the city. The grassy knoll at its base is the perfect spot to sit in the sun and enjoy the views. Since you’re in the City of Love, take a look at the ‘I love you wall’, a public art project with a selection of more than 300 messages people have written about love.

You can’t escape the fact Paris has a big reputation for its entertainment industry, with a focus on sultry shows matched by impeccable cuisine at the Parisian cabarets. Le Lido is the biggest cabaret and offers backstage tours to give you a glimpse of the life of the performers behind the scenes. The decadent dressing rooms and walk-in costume wardrobes make you think about the stories the walls could tell from years of show business…if only they could speak.

A cabaret tour is the perfect entrée into attending a cabaret in your final, blow-the-budget night in Paris. As well as Le Lido, there is Le Crazy Horse (which is said to be a little more risqué) and of course, the Moulin Rouge. If you stay at Le Lido after the tour, dinner is served from 7pm and the show kicks off at around 9pm; the whole thing costs 160€. If you want come to the show only it costs 80€. It’s certainly the way to end your Paris foray in style…until next time anyway.