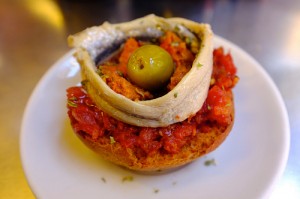 If you’re from cooler climes, it can be easy to forget the way that food is revered throughout the Mediterranean region. In the buzzing cafés, elegant restaurants, packed markets, and intimate bars of Barcelona you can find first-rate cuisine from all over the world. The city’s love affair with food harks back to its historic role at the centre of a maritime empire, but also its modern-day status as a cosmopolitan world city.

Yet getting an exceptional culinary experience out of the city isn’t always easy. Many visitors to the city struggle to work out the difference between tourist traps offering overpriced paella and restaurants where the diners are discerning Catalan locals. So we thought we’d give you some tips on how to get grips with all that makes Catalonia a mecca for foodies.

What can you expect from Catalan cooking?

Barcelona has always been perfectly placed to cook up a storm, taking advantage of the bounty of the Mediterranean Sea on one side and fertile countryside on the other. In fact, the tagline of Catalan cuisine is ‘mar i muntanya’ – ‘sea and mountain’, referencing the locals’ tendency to mix seafood and meat. Somewhere between the elitist haute-cuisine of the French and the more down-to-earth approach of the Spanish, the resulting style has made it one of the most highly respected cuisines in the world.

The rest of Spain gets a look in, too, with Catalan chefs happy to borrow classic fare from the rest of the Iberian Peninsula. The city definitely loves its tapas. Especially popular are the Basque-style pintxos – small pieces of bread stacked with a variety of ingredients and skewered with a cocktail stick. 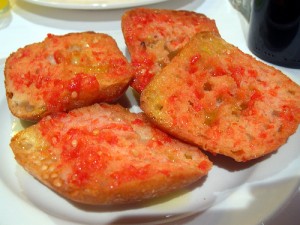 Typical fare includes pa amb tomàquet, bread smeared with tomato, olive oil and garlic – a basic yet surprisingly tasty morsel. Esqueixada, a salt cod salad, is a rare treat on a warm Barcelona day. Rice dishes feature heavily and are often accompanied with a pot of allioli, a heavy garlic mayonnaise. If you fancy something simple try local favourite mongetes amb botifarra (pork sausage with white haricot beans). For dessert you can’t do better than crema catalana, a Catalan version of crème brûlée. And, of course, the region’s vineyards offer a myriad of vintages ideal for washing down a long Spanish lunch.

Catalonia holds its cultural distinctiveness from the rest of Spain close to its heart, and food is no exception. In recent years the region has had much to be proud of as various chefs with gastronomic genius have thrust it to the centre of the world stage. The undisputed leading light is Barcelona-born Ferran Adrià, a chef with three Michelin stars who is arguably the world’s best chef.

Adrià’s often surreal creations (such as foamed Spanish omelette served in a sherry glass) have done a lot to dispel the image of Catalan cooking as a mainly traditional and rustic affair. His famous El Bulli restaurant on the Costa Brava closed its doors in 2011 (getting a table was impossible anyway). However, he continues to inspire the next generation of chefs through his workshops, ensuring his home town’s place at the top table of haute-cuisine.

Now, some of you might be worried that eating out in Barcelona is all about minimalist décor and tiny portions of overpriced and pretentious delicacies. You’ll be glad to hear that this couldn’t be further from the truth. Even Catalonia’s Michelin-starred chefs extol the virtues of the hearty dishes and fresh ingredients that are at the root of the region’s claims to fame. Here are five of our favourites.

Pitarra
This restaurant, located in the heart of the Ciutat Vella, opened its doors in 1890 and is one of the oldest in Barcelona. Its name refers to the writer and dramatist Frederic Soller, who went by the name Pitarra. You’ll find a huge selection of traditional Catalan food, particularly fish, served up in the midst of a truly unique atmosphere. Tip: treat yourself to pheasant in a Cava sauce – you’re on holiday!

Casa Calvet
Casa Calvet is one of Barcelona’s most well-known restaurants, and is set in L’Eixample Dreta in a building designed by Antoni Gaudí. The factory’s former offices were converted into elegant dining rooms that have a private and welcoming atmosphere. The experimental cuisine of chef Miquel Alija combines traditional Catalan cooking with Asian overtones. Tip: ask for an intimate ‘taula cabina’ (a wooden booth) on arrival.

Biblioteca Restaurant
This simple Raval restaurant has acquired an excellent reputation for its exquisite cuisine. The chef is particular about using the freshest ingredients from the region. With its open kitchen at the end of the restaurant, it provides a memorable dining experience. Tip: apparently the ‘New York Times’ rates its apple pie.

La Tomaquera
Expect home-made wine and a raucous background to your meal from this Poble Sec stalwart. If you want to try Catalan snails this is the place for you – they’re the house speciality. You’ll also find a full menu including grilled and cured meats among several other Catalan dishes. Tip: you can’t beat the home-made sangria in the summer.

El Glop
This restaurant offers rustic no-nonsense Catalan food and décor. It might not be fine dining but the food is still great, as is the service and the atmosphere. Prepare yourself for big portions of hearty food which should be accompanied by a pitcher of Cava sangria. Set away from the city centre in Gràcia this restaurant is the perfect alternative to the tourist traps in the centre of town. Tip: have the ‘tocinillo’, a rare caramel treat, for dessert.

While Pisa is most famous for its leaning tower (actually the Cathedral’s bell tower), the city has far more strings to its bow than its tilting tower alone. Pisa is a medieval university town home to ancient churches, centuries-old art, a picturesque river promenade, markets, fashion boutiques and tonnes of trattorias, not to mention the fact that Italy’s western coastline is just kilometres away. It’s no wonder, then, that Pisa attracts hundreds of thousands of visitors every year. 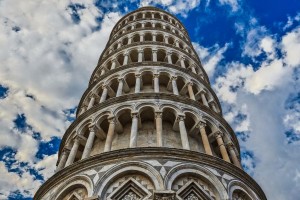 Start your trip by taking in the tower that is Pisa’s most globally known icon, the Leaning Tower of Pisa (Torre Pendente di Pisa). This freestanding bell tower is located in Piazza del Duomo, also known as Piazza dei Miracoli, or the ‘Field of Miracles’.

The bell tower’s tilt is put down to the inadequate foundations used during its construction in the 1100s. While the tilt has been partially reduced in more recent decades to ensure the structure’s stability, the novelty of the tower’s angle continues to draw in a million visitors a year.

Climbing around 300 steps inside the tower will earn you awesome views over the rest of Pisa. Enjoy a strong coffee and a brioche (jam-filled bun) in one of the nearby cafés afterwards to do as the Italians love to do for a light breakfast.

Don’t be put off by the fact this is the most touristy part of town – international visitors flock here for a good reason and while you’re in the city you should soak up all the history the Piazza dei Miracoli offers. Hailed as a global centre for art, both the architecture of the buildings and their contents offer stunning history lessons. 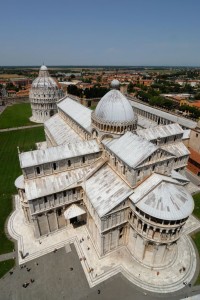 This centres on the Duomo, the cathedral of the Archdiocese of Pisa, with its Romanesque architecture and Byzantine mosaics inside. Also have a look at the domed Baptistery, the largest in Italy, and the Camposanto, the walled cemetery and adjoining Gothic cloister. While most of the frescoes were destroyed during World War II, the surviving ones can now be viewed at the nearby Museo delle Sinopie – most definitely worth a visit. The Museo dell’Opera del Duomo is also a popular stop. It’s home to many of the sculptures and furnishings no longer used in the cathedral and its other buildings.

You’ll have worked up a good appetite by now. Move away from the more touristy cafés and bars near the Piazza dei Miracoli and stop for lunch at the family-run Ristoro Piccadilly, which has lunchtime pastas for as little as 6.50€, as well as other family-friendly dishes.

Nearby is the Orto Botanico di Pisa, the botanical gardens first established in the 1500s and run by the University of Pisa. With gardens, ponds, greenhouses and various arboreta, there’s no better place in Pisa for a gentle stroll to help you digest your lunch.

Continue your day of culture in Pisa by paying a visit to the second main square in the city, the Piazza dei Cavalieri, or Knight’s Square. As the centre of politics during the Pisan Republic as well as the seat of the Knights of Saint Stephen, various statues and monuments today pay homage to the square’s important history. 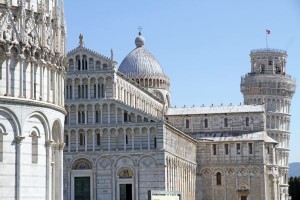 Buildings of interest in Piazza dei Cavalieri today include the Church of Santo Stefano dei Cavalieri and its bell tower, dating back to the 1500s. Given the focus on tackling piracy in the Mediterranean at the time, there are a number of trophies displayed inside from historical encounters with pirates. The Palazzo della Carovana was originally the headquarters of the Knights of Saint Stephen and is now a University building. Opposite is another palace, the Palazzo dell’Orologio, the previous infirmary of the Knights. Literature fans may recognise the location from Dante’s Divine Comedy, where he describes the imprisonment of the suspected traitor, Count Ugolino della Gherardesca, who was left to die of starvation here in 1288.

Visit your final square for the day and head further east to Piazza Martiri della Libertà, Freedom Martyrs Square. A less visited part of town, it’s a great spot for a quieter walk and a lesser known insight into Pisa’s past. This was previously the location of a monastery and convent, both of which have been destroyed or demolished as a result of various events in history. Today, there’s still a statue of the Great Duke of Tuscany Peter Leopold, widely cited as being the brains behind many positive reforms in the region in the 1700s. 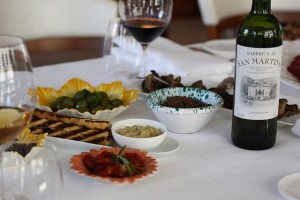 Round off your first evening in Pisa with a wander along the narrow backstreets in the area surrounding Piazza Martiri della Libertà, treating yourself to a glass of wine and some antipasti in one of the cutesy bars filled with locals, before heading over for a relaxed dinner at Osteria Rossini. A restaurant in a cave, serving traditional, home-made Tuscan classics, this local favourite ensures zero disappointment for your first meal in Pisa.