Florence can be deceiving to the average visitor. Because it’s such a small city, many think that one or two days will be enough to see all that the Renaissance capital of Europe has to offer. While it’s true that you could cover most of the city by foot in one day, that wouldn’t leave much time for sightseeing. We’ve put together a 3-day itinerary that will make you feeling like a local by the end of your trip.

In order to get better acquainted with the city, it’s best to use the major cultural sites as your reference points. Keep in mind that it’s very common to refer to parts of the cities according to the iconic Duomo Cathedral, riverside or even ‘other side of the river’ just to give you an idea. Get a map of the historical centre and very soon you will see more history than you can even imagine, just by walking 50 metres in almost any direction from the centre of town. 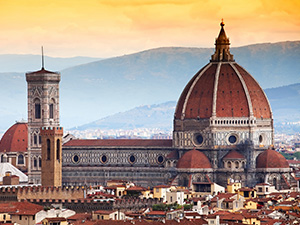 To get oriented within the city, it might not be a bad idea to purchase a ticket to the red hop-on hop-off buses that you will see making their way around the place. This way you can see all of the major sites including nearby hill town Fiesole. There are two lines, A and B, which cover most of the city and surrounding area.  Of course you would want to stop and gawk the first time you see the Duomo Cathedral as it’s hard to imagine a sight more magnificent. Watch out for iconic sights such as the vast Uffizi Gallery, the statues underneath the adjoining Loggia di Lanza, the enormous Pitti Palace and Boboli Gardens, and of course the many churches around town including Santa Croce Church which contains the tombs of Galileo, Michelangelo, Machiavelli, and Dante. 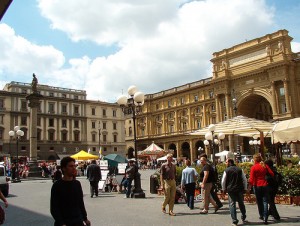 Visiting Florence and grabbing ‘un caffe’ is practically a must. That satisfying shot of espresso is just what you need to get your second wind for absorbing even more culture, history and beauty. Piazza della Repubblica is one of the main piazzas in the historical centre and is the perfect place to stop for your caffeine kick. Try Gilli, a historical café on the corner of the square.

The city of Florence was actually founded in Roman times by Julius Caesar, for his veteran soldiers in 59BC and named Florentia, ‘the flourishing one’. Piazza della Repubblica happens to lie on the heart of the ancient Roman Florentia. Later it became the main market square and still reflects that culture by being surrounded by the main shopping streets of the city.

Close to Piazza della Repubblica lies the Porcellino market (Mercato Nuovo) where the famous boar stands. This enclosed space has been around since the 14th century, created by Grand Duke Cosimo I, and now houses an array of leather goods and souvenirs.

The Bronze Boar (which is actually a fountain) is a big tourist attraction and people take turns rubbing its snouts and dropping a coin down its mouth. The money is donated to charitable organisations around the city.

Lunch or any meal for that matter is pretty much an experience in Italy. Italians have a love for food like no other and you can find a plethora of local traditional restaurants serving up all sorts of tasty classics. We recommend being a true local and stopping by a local ‘tripperia’ (tripe stand) close to Piazza Cimatori for a tasty panino and a glass of red wine. Just don’t think about what’s inside (it’s sure to be good). 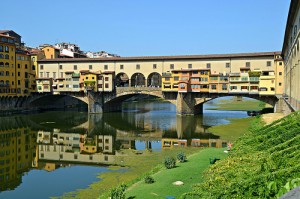 Close to Piazza Signoria is the River Arno and a few really famous bridges, in particular the Ponte Vecchio. Wander under the cloisters close to the ‘Old Bridge’ and remember the saying – if you hold hands with someone under it, you risk falling in love. Young lovers leave locks with their initials by the bridge. Walking across is like going back in time.

The Ponte Vecchio was the only bridge to survive intact during WWII. Not known for being a wonderful place in the medieval areas, if you look up high you can see the Vasari Corridor – the Medici family’s escape route running from Palazzo Vecchio to the Palazzo Pitti. The shops on the bridge all sell gold and at a pretty price. Window shop until you feel tempted to actually buy something.

If you cross the Ponte Vecchio and keep going straight ahead you will invariably run into the impressive and magnificent Palazzo Pitti Musuem. This huge residence’s construction bankrupted one noble family – the eponymous Pittis – and was subsequently bought by the Medici family as yet another personal residence. Later occupied by Napoleon, this palace now houses several minor galleries and is home to the famous Boboli Gardens.

That’s almost it for day one. 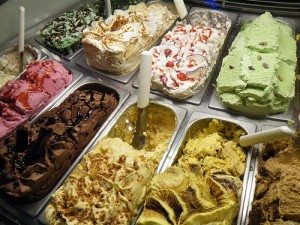 Heading towards the small streets directly opposite Palazzo Pitti will take you to the charming Piazza della Passera for a spritz at Caffe degli Artigiani to wind down the day and indulge in a spot of people watching. A picturesque piazza with a less than pretty name, it is a veritable foodie heaven with three different restaurants to choose from. For traditional delights Il Magazzino on one corner serves delicious no-frill favourites, while Trattoria 4 Leoni offers outside seating and great pasta dishes. Skip dessert and stop by the gelateria (always in the same piazza) for the perfect ‘sweet’ ending to a wonderful day.