The whole year around the climate in Lisbon invites you to visit the city, due to it’s close location to the Mediterranean sea. On average summers are dry and hot and the winters rainy, but warm.
Especially in summer it’s a great idea to go on a city break to the Portuguese capital. For several months you have the possibility to participate in different events and festivities. One of the most popular celebrations is the Festa de Santo Antonio, the patron saint of Portugal.
If you plan a trip to Lisbon during summer, we recommend you to try to join this colourful event in June.

In any case, we invite you to have a look at the weather divided by seasons to decide which is the best time to travel to Lisbon for you. 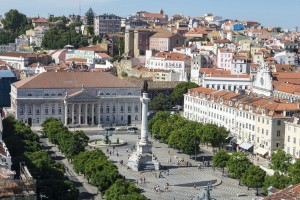 Spring is a good time to travel to Lisbon. Already in April you’ll be able to enjoy sunny summer days with temperatures up to 19 degrees. If that is not summer-like, then we don’t know. Still we recommend you to take a jacket for chilly nights and an umbrella, because the weather in spring is still a bit unpredictable. 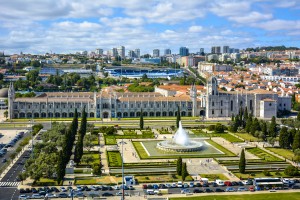 Summers are always really warm in Lisbon. During this time you can leave your jacket perfectly at home and enjoy a nightly walk through the small streets of Bairro Alto. After a day full of sunshine and visiting the beautiful buildings of Lisbon, there is nothing better than to sit down at a terrace and relax with a cool drink while watching the city life happening around you. 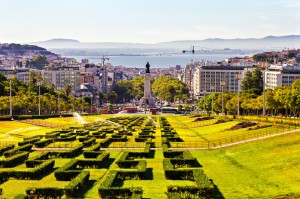 As we already said, a trip to Lisbon is a good idea the whole year round, but autumn is especially recommendable, if you’re looking for summer-feeling without too high temperatures during the day.
If you travel during October to the Portuguese capital make sure to visit the Doclisboa International cinema festival. 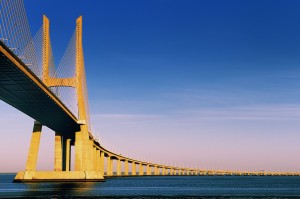 Even winter is a good time for a city break in Lisbon. Nights can get chilly, but during the day you’ll still be able to soak up some sun rays. Compared to the whole year it rains more in winter, but you can be lucky and have a weekend completely rain free. Festivities during the end of the year are All Saints’ Day, Christmas and New Year’s Eve.

No trip to Lisbon without visiting the Belém district. That’s why we’re going to explore this unique part of the city on your second day. Another remarkable part of the Portuguese cuisine and specifically of Lisbon are the Pastéis de Belém. On your second day you’ll finally get to try them, if you haven’t already before. You can take the tram 15 from Cais do Sodré station or the bus 27 or 28. The tram is more fun, though. We’ll finish the day off with a beautiful Fado concert. 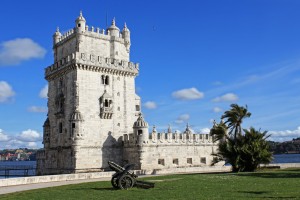 The Torre de Belém is one of the most important monuments in the history of Lisbon. This is the place from where many of the great Portuguese explorers started their big journeys, for example Vasco da Gama to discover the seaway to India and Christopher Columbus even stopped here after discovering the new world.
You can enter the tower, which was built in 1520 as part of the Tejo defence system. Since 1983 it’s a UNESCO “Cultural Heritage of Humanity”. In the upper part you’ll find a museum. Make sure you’ll get your ticket online to save time. If your plan includes visiting the Mosteiro dos Jerónimos after, you might want to get the combination ticket for both attractions for €12. Every first Sunday of the month the entrance is free.

11:30 – Be amazed by the long history of discoveries – Padrão dos Descobrimentos

From the Torre de Belém walk (10 min.) over to the Padrão dos Descobrimentos, a statue honouring the explorers of the age of discovery (15th and 16th century) of Lisbon. At the top you’ll find Henry the Navigator, Vasco da Gama, Nicolau Coelho and many more. It was built only in 1939 by architect José Ângelo Cottinelli Telmo and sculptor Leopoldo de Almeida.
The Padrao dos Descobrimentos is located directly at the Tejo River, which gives you great views of the bridge Ponte 25 de Abril. Don’t you think it looks are very similar to the Golden Gate Bridge in San Francisco?

Walk over to the Centro Cultural de Belém (CCB), the hub of different kinds of art and culture in Lisbon. Every first Sunday of a month a market is held, where you can buy all different types of handcraft, music related goods and much more. Besides, almost daily a concert or another event takes place in the light rose-coloured building and for many performances the entrance is free.
Just across the street you’ll find the Jerónimos Monastery, which got certified as UNESCO World Heritage Site in 1983.
The monastery was opened in 1601 and is one of the maintained buildings. Alone, the beautiful arch decoration is worth a visit of the cloisters. 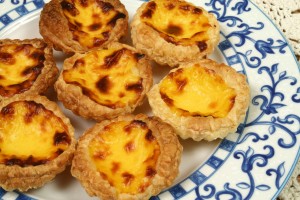 This is probably the happiest moment you’ll experience during your city break to Lisbon, even if you don’t have a sweet tooth. After many historical buildings and art, it’s finally time to explore the most famous and not less popular Portuguese pastry, Pastel de Belém or also Pastel de Nata. And there is no better place to try the little piece of heaven than its traditional home place Casa Pasteis De Belem. From the monastery it’s only a 4 min walk.
The pastry shop is crowded at all times, but waiting a bit is definitely worth it. Order the sweets to go and search for a sunny place in the park Jardim da Praça do Império. Take a break and enjoy the most typical dessert Portugal has to offer.

The district of Barrio Alto is not only great when it comes to nightlife, as you saw on your first day – It’s also the shopping paradise of Lisbon. The difference between the atmospheres during day and night is so significant that we’ll visit the district again today by day.
We suggest you to take the green metro line to Baixa-Chiado and just walk around the small streets. You’ll find many shops, restaurants and of course, bars. 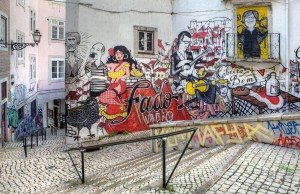 A dinner listening to Fado music is probably the most traditional evening you can experience and the best way to end an unforgettable weekend in Lisbon.
We suggest you to stay in the Bairro Alto. Here you’ll find many restaurants and bars that will offer you different kinds of Fado. We’ll suggest you to choose a small place where you can see locals inside. Or you follow our suggestion and reserve a table in A Tasca do Chico. It’s a very small, cosy place and a reservation is necessary, if you plan to enjoy dinner and drinks. Every Monday and Wednesday they invite to Fado Vadio, which many Fado fans like better, because it’s performed by amateur singers. The bar is located only 10 min. walking from the metro stop Baixa/Chiado in the street Rua do Diário de Notícias 39.
Enjoy!

Lisbon is not only the capital of Portugal, but has also one of the most delicious and interesting gastronomies in Europe. It’s cuisine and the use of ingredients and spices dates back to the time of Vasco de Gama in the 15th century. Spices were brought into the county and changed the way of preparing food completely.

Nowadays, there is so much to explore when it comes to cuisine in Lisbon. You find fancy, modern restaurants with high-class menus and award-winning chefs as well as traditional and simple Portuguese restaurants.

Due to its direct location to the Atlantic Ocean and to the River Tejo, it’s just logical that you’ll find many fish dishes on the menus in the Portuguese capital. As a matter of fact, one of the most famous plates in Lisbon is the “Bacalhau”.
But Lisbon is not only famous for its substantial cuisine but also for its pastries, such as the “Pastel de Nata” (Pastel de Belem).
Not to forget the delicious wine. Port wine is the traditional wine coming only from Portugal. The name comes obviously from the city Porto, but that doesn’t mean that you can only drink it there. So, don’t leave Lisbon without trying Port wine.
Once you enter a restaurant in Lisbon you can be almost sure that they’ll serve you a starter, most of the time consisting of bread with butter and sometimes even olives.
Find out more about Portuguese eating habits and the most famous dishes.

5 Dishes you should try in Lisbon 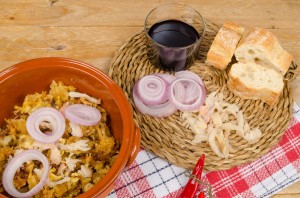 Bacalhau – is the most typical dish you can get in Lisbon. It’s said that there are 365 ways to prepare this codfish, for everyday of the year one. A very popular form is the “Bacalhau à Brás”, served with scrambled eggs and French fries).

Pastel de Belém – is also called “Pastel de nata”. The recipe of this sweet pastries dates back to the year of 1834, where it got invented by monks and nuns in the monasteries and still remains the same till today. Later the “secret recipe” was sold to a pastry shop in Belém, where the custard tart is still made out of egg yolks, sugar and milk. A must-try in Lisbon!

Queijo da Serra – (engl. Mountain cheese) is cheese made out of sheep milk. It comes in three varieties: aged with an intense flavour (curado), firm (meio-curado) and soft (amanteigado). 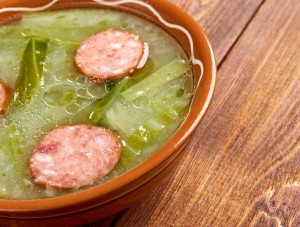 Caldo Verde – (engl. green broth) is a traditional soup, is made out of potatoes, kale, olive oil and salt. Sometimes other green vegetable can be added. It might also be served with chouriço, to give it a different flavour.

Ginginha – is a cherry liqueur, which is often served in glass made out of chocolate. After enjoying the delicious drink, you’re free to eat the chocolate. One of the many traditional coffee shops is “A ginginha do Rossio”.

Our top food places in Lisbon

Cantinho Lusitano – This traditional restaurant is small, but very cosy and famous for it’s delicious plain fare. You should definitely reserve a table before getting there, because it only consists of six tables. We suggest the Pica-Pau de Vitela com Batatinha doce frita (stripes of veal with sweet potato and “special sauce”).

Restaurante Cabacas – This is a restaurant only dedicated to meat. But not any kind of meat, in this restaurant the steaks are served raw (Naco na Pedra) next to a hot stone. You’ll put the steak on the hot stone and decide yourself how raw you want to enjoy it. Well-done is also possible. This restaurant is very famous in Lisbon, so make sure you bring some waiting time. We recommend having lunch at the Cabacas and if you wish to have dinner there, being there around 8pm. Don’t forget to put yourself on the waiting list, when you get there.

Taberna das Flores – is a restaurant that offers typical Portuguese cuisine, with the slight distinction that here you only get fresh and seasonal ingredients, bought the same day on the local markets. They don’t accept credit cards and unfortunately you can’t reserve a table.

Esquina da Alfama – is the place to be if you’re interested in a night full of drama, tradition and emotional music. This is the place to get to know the culture of the famous Fado. You have the choice between just enjoying a glass of wine and snacks or real dishes.