We’re going to spend our second day in Madrid exploring the stark contrast between two different neighbourhoods. First we’ll enter the somewhat gritty, up-and-coming Lavapiés district before venturing into the manicured green lawns in the parks and gardens surrounding Madrid’s Royal Palace and Renaissance and Baroque buildings in the Austria’s area.

Start your tour of Lavapiés in the triangular plaza of the same name. Madrid’s Jewish Quarter until 1492, the area is now known for its bohemian multi-ethnic scene. Browse the wares in the eclectic variety of shops on the narrow pedestrian streets radiating out from the plaza, then head up Calle Ave María towards el Mercado Antón Martín, a typical 2-storey market. Shop for cooking essentials like local meats, cheeses, freshly baked bread, and seasonal fruits and vegetables. 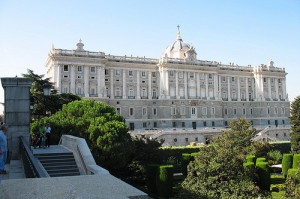 Check out the place where the Spanish Royals stay when they’re ‘officially’ at home in Madrid. Built by Felipe V., the first of the Bourbon kings, there are 2,800 rooms in this Italian baroque-style mansion, but only 50 are open to the public. Enjoy amazing views of the city, the surrounding countryside and Roman aqueducts from the Palace’s courtyard. Frescos are all around, and there’s no shortage of velvet or gold in its decorating scheme, either. Crowd-pleasers include the Palace’s manicured gardens, and old pharmacy packed with ancient herbs and concoctions. To get there from Antón Martín Market, stroll up Santa Isabel to Puerta de Sol and take line 2 direction Cuatro Caminos to the Opera metro stop.

Cross Plaza de Oriente and pass the Royal Theatre to get to Convento de las Descalzas Reales. Beyond an imposing and grim exterior live a few nuns, numerous chapels, the bones of Saint Sebastian and priceless tapestries of works by Rubens. Not to mention a number of Renaissance frescos and murals by Claudio Coello, an important 17th-century Madrid School artist. 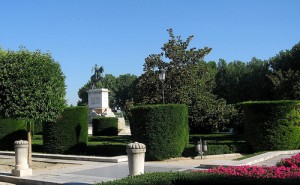 Feast on Spanish fare with views of the royal palace at one of the restaurants on Plaza de Oriente, a semi-circular plaza with a statue of Philip IV on horseback in the middle. On sunny days, try to get a table on Café de Oriente’s terrace.

Amble over to the Austrias District and stroll the narrow streets that lead to two of the oldest and smallest churches in Madrid – San Nicolás de las Servitas and San Pedro el Viejo. Stop to soak up the historic ambience in Plaza de la Paja, a square dating from when the Hapsburgs ruled Spain. Check out the gothic Torre de los Lujanes, as well as the red-orange old town hall, Casa de la Villa, in one of Madrid’s oldest squares, Plaza de la Villa.

Snap shots of the Guadarrama Mountains in the distance at Vistillas Park. Afterwards, plant-lovers and gardening aficionados can carry on to the more extensive gardens at Campo del Moro. 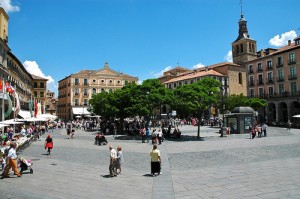 Take a leisurely half-hour stroll towards the Plaza Mayor through the garden and along Calle Mayor until you get to the square. The Plaza Mayor and surrounding streets are a great place to sample food-on-the-go, madrileño style. Snack on a ‘bocadillo de calamares’, fried squid on a baguette slathered with mayonnaise chased down with a frosty beer, and supplemented with a side portion of chips. You can try this at Cerveceria Plaza Mayor right on the main plaza, or Casa Rúa, on Ciudad de Rodrigo Street near the plaza. 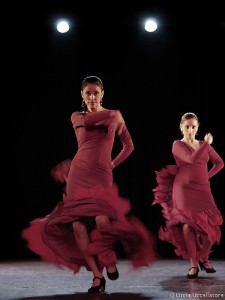 From ballet and opera in historic theatres, to sporting events and flamenco dancing in tablaos, Madrid offers up a veritable all-you-can-eat buffet of entertainment options. So many, in fact, that you may be loath to choose just one.

Option 1: Shell-out a few euros for a show at Madrid’s Royal Theatre. Enjoy an opera or a ballet in this historic building restored in the 1990s. While it may be impossible to fit in all three in one night, you may be able to combine an early opera or football game with late night Flamenco.

Option 2: Score tickets to a Real Madrid Game at the Santiago Bernabéu Stadium and scream your loyalty to the home team in the company of 75,000 spectators. If you can’t get tickets to a match, show your team spirit with local fans in one of a multitude of sports bars near the stadium.

Option 3: Get your flamenco fix at Casa Patas. Relax with a drink at the bar until the show starts (usually after 10pm). Get your fill of this gypsy tradition, declared intangible heritage of humanity by UNESCO. After the show the metro is likely to be closed, so call ahead for a taxi.

Midnight and beyond – Go Loco

To satisfy late-night cravings for flamenco singing, dancing and guitar-playing, grab a taxi to Clan. Flamenco shows begin at midnight on Fridays and Saturdays and admission is free.

Even with three whole days to spare you may not be able to claim you ‘know’ Madrid very well. As repeat visitors and long-time residents will tell you, the Spanish capital is constantly changing and growing, with new restaurants, bars and attractions popping up on a seemingly daily basis. Of course that doesn’t mean you can’t flirt and laugh with the city in tapas bars and museums over a long weekend. Here are our insider tips for a 3-day dream date with Madrid.

A look at a map of Madrid’s sprawling urban expanse will point you towards reason – this is a city best explored in neighbourhood-sized chunks. Zigzagging across it all to see attractions on a whim will only lose you time and wear out the soles of your shoes. Madrid is known worldwide for fountains, green spaces and art museums, and the good news is that all of these are within walking distance of the historic city centre. 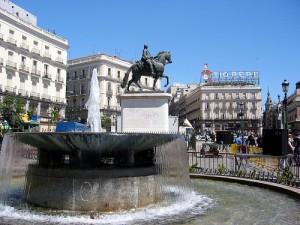 Start your day in Puerta del Sol, the point from which all of Spain’s major roads originate, and the centre of Madrid’s large but walkable Old Town. Sit down for a ‘cortado’, an espresso with a dash of milk, or a freshly squeezed orange juice, and spend a few minutes people-watching before heading towards Paseo del Prado. On the way, stop at Chocolat Bar and dip deep-fried churros in thick fondue-style Spanish hot chocolate. 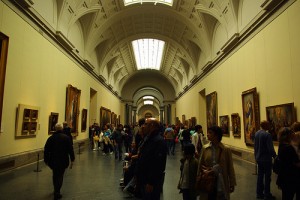 Less than 10 minutes from Chocolat spend an hour or three gawking at great works of art in Madrid’s world-famous Prado museum. Wander among great works of art by Spanish and European masters like Goya, El Greco, Velázquez, Rembrandt and Botticelli. Even if art isn’t your cup of tea, make sure to search out The Garden of Earthly Delights by Heironymus Bosch, Las Meninas by Velázquez, and two of Goya’s best-known portraits (exhibited in the same room), The Nude Maja and The Clothed Maja.

Insider tip: if you plan to visit the Reina Sofia and Thyssen Museums as well, save money buying an Art Walk Pass at the first museum you visit.

If you do not have much time and would like to have a tour guide with you, book a guided tour in Madrid.

12:30 – Stroll Around the Botanic Gardens

Take a break from museums and get a breath of fresh air strolling around the Royal Botanical Gardens opposite the Prado en Plaza de Murillo. Go in through the Puerto de Murillo entrance and spend some time admiring the over 90,000 varieties of plants in the gardens.

Feeling hunger pangs already? A short walk from the gardens, you can choose between traditional Spanish paellas served in the charming courtyard at Arrocería Gala or all-natural vegetarian and vegan fare at Al Natural.

Forget traipsing to the far reaches on your first day and choose from the options nearby listed below.

Option 1: Complete your tour of Madrid’s Golden Triangle (the Prado, Reina Sofia and Thyssen Art Museums) along Paseo del Prado. Pay your respects to Picasso’s ‘Guernica and Dali’s ‘The Persistence of Memory’ (aka the melting clock) in the ultra-modern Reina Sofia Art Museum, and admire impressionist and expressionist paintings by the likes of Monet and Van Gogh at the Thyssen-Bornemisza Museum. Don’t forget to stop by Caixa Forum to check out French botanist Patrick Blanc’s vertical garden—inside, explore temporary exhibits with subject matters ranging from modern art to ancient history. 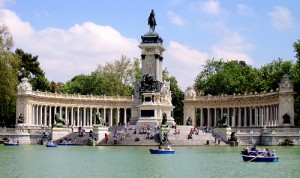 Option 2: Spend an afternoon outdoors in Madrid’s Buen Retiro Park, originally conceived by Felipe IV as an outdoor preserve for kings, queens and their close confidants in the 17th century. Hop on a boat and take a turn around the lake. Pose for pictures in the Crystal Palace, a glass and steel greenhouse built to hold an exhibition of plants from the Philippines (a Spanish colony at the time) and now used to house temporary art exhibitions. Afterwards, chase ducks, swans and pigeons around the park with your camera or just cop a squat in the grass and relax with your favourite book.

Work your way back towards the Gran Via for a few hours of shopping before stores close for the night. On the way, stop at Plaza de la Cibeles to pose for pictures in front of Madrid’s most famous fountain and snap shots of the city’s beautiful town hall, designed by Antonio Palacios. Strut down the main drag of Gran Via browsing the goods at luxury stores, and then wander the side streets in search of hip local boutiques and bars. 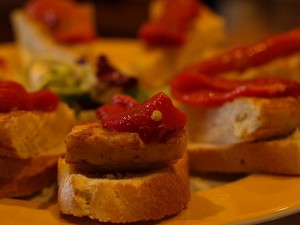 Stop for a drink and dinner at a tapas bar or restaurant near the Gran Via. We suggest pinchos (single-serving appetizers) and wine at the bar in Mercado de La Reina before turning in for the night to your Madrid apartment for some well-deserved shut-eye. You may have seen a lot of the city for one day, but there’s much more to see tomorrow.