If you don’t speak German or have never been to Berlin before, it can be a little confusing working out where to go to get to your apartment on time, especially considering Berlin’s massive public transport network. Here’s the lowdown on how to get into the city as quickly as possible. 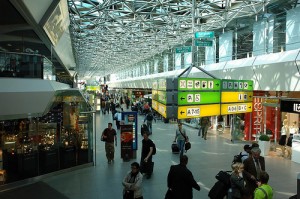 After that long flight it’s easy to be a little disoriented and a tad overwhelmed as you leave the terminal. However, Tegel is located very close to the centre of Berlin, only five miles from the city centre. So it’s very easy and very efficient to reach the city centre in no time at all.

The first thing you need to bear in mind is that there are no trains running directly from the airport – only buses. You will most likely need to depart at one of the train stations and catch the appropriate train onward. To make this easier you should consider exactly where it is you’re going and memorise the station closest to your destination, be it S-Bahn (suburban train) or U-Bahn (underground train) station. Now, consider whether that’s in the east or the west of the city, as this should decide which bus you take. This map shows Berlin’s expansive rail network.

There are four bus options departing from Tegel airport. Three of these routes take you into West Berlin with one then taking you east afterward, while another bus takes you north. 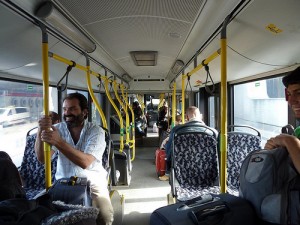 This bus is the one most people heading into the city will catch. It’s a direct bus to Alexanderplatz (the centre of eastern Berlin), but travels through the western half of Berlin. It stops at Beusselstraße S-Bahn station for those needing to catch the Ring-Bahn (train line encircling the city), from where you can catch the S41 train into east Berlin, or the S42 train west. The bus, however, continues onward to Hauptbahnhof (main station). It takes between 40 minutes and an hour (depending on traffic) to reach Alexanderplatz and you will be dropped right outside the main terminal.

At Hauptbahnhof you’ll be able to change onto the S-Bahn lines S3, S5, S7 and S75. These same S-Bahn lines are accessible once you’re at Alexanderplatz, as well as the underground lines U2, U5 and U8.

This bus is the one to take if you’re heading to the west of the city. Finishing at the Zoologischer Garten S-Bahn station, the route winds through west Berlin stopping at dozens of U-Bahn and S-Bahn stations from which you can change transport and quickly reach anywhere in Berlin.

This bus takes a similar route as the 109, only with a more direct route and fewer stops. So if the western train hub Zoologischer Garten is where you’re heading, this will do the job of getting you there nicely, and within 20 minutes.

This bus runs parallel with Tegel airport, and is the right choice for anybody staying in in the northern part of the city. Within 10 minutes it will have you at Kurt-Schumacher-Platz U-Bahn station and at Osloer Straße U-Bahn station in around 20 minutes.
At Kurt-Schumacher-Platz you can change to U-Bahn line U6, and at Osloer Straße to U-Bahn line U8 or U9.

As Tegel airport is located in zone B, you should purchase a ticket for zones AB for each of the above bus routes. The price for a one-way ticket is 2.40€. You can collect your tickets either when you board the bus at the driver’s booth, or at any of the ticket machines outside the terminal.

All of the above buses depart from Tegel every 10 minutes or so, allowing for on-peak and off-peak periods, with the longest wait at off-peak times being 20 minutes.

There are always plenty taxis outside the terminal and they’re very easy to spot. The price of a taxi into the city centre will generally cost around 20–25€ or more. It will take around 20 minutes or so to get central (so only marginally quicker than the bus) and the price will be metered.

If you are flying into any of the Berlin Airports for the first time one of the most convenient and comfortable ways to get to the city is by a private airport transfer. A chauffeur will be waiting for you in the arrivals hall with a name sign, for you will have someone with you from touchdown to apartment. The driver will help you with your luggage and guide you to your prestige vehicle and you will be driven to your apartment or hotel.
Taking a private car service is also ideal if you are traveling outside of the city centre where public transportation cannot take you, making sure that you get where you go on time. Our recommended company for this service in Berlin is myDriver Airport Transfer Berlin.

A new convenient way to get to and from the Berlin Airports is car sharing. Just use a car sharing vehicle parked in Berlin and drive yourself to the airport, no waiting for public transportation, or calling a taxi, just hop in and drive! Once you arrive at the airport you will be able to park at the designated car sharing parking area. Leave the car there and heads towards the gate, it’s just that easy! Are you landing at a Berlin Airport no problem, head towards the car sharing parking area at the airport. Find the right car you want, hop in and drive it to the Berlin city centre. Park it anywhere and don’t worry about paying for parking. With car sharing everything is included in the per minute price, parking, fuel, insurance, rental, tax and more. Taking more than one person to the airport can be the cheapest option getting to or from the Berlin Airports. Our recommended company for this service is DriveNow Car Sharing Berlin.

Airlines such as Ryanair, Germanwings and above all easyJet all operate out of Berlin’s Schönefeld Airport. The journey to and from the airport can be somewhat confusing, especially for newcomers to the city. Sadly, a lot of information found online or on location is either insufficiently explained or simply incomplete.

The first important step is to be clear about where exactly you want to go. If your destination is in the eastern or north-eastern part of the city, you should take the S9 (suburban train). The southern part of Berlin is most easily reached with the SXF Airport Express Bus. If you’re heading to the Zoologischer Garten, Kurfürstendamm, or Alexanderplatz, then it’s best to take the regional trains RE7 or RB14.

Find out which S-Bahn (suburban train), U-Bahn (Underground), or bus station is closest to your destination and then use the BVG’s website to find your quickest and best connection. Using the search option, enter your point of departure and your destination, followed by the date and time of your journey and you’ll be on your way in no time.

After 23:00 travelling from Schönefeld Airport becomes more difficult, since most public transport options stop running at that time. However, you still have a couple of options. You can either pay for a taxi into the city (around 40€) or alternatively you can take the lengthy journey on the night bus line N7.

A big advantage of this option is that the

Airport Express travels straight through Berlin, thereby stopping at many of the city’s districts.

Normal Berlin public transport tickets can be used on these trains, however make sure your ticket is valid for Zone C (where the airport is located) as tickets are often checked along this route. The price for a single ticket is 3€.

The route of the RE 7 Regional Train starts at Berlin-Wannsee and stops at Berlin-Charlottenburg, Berlin Zoologischer Garten, Berlin Hauptbahnhof, Berlin Friedrichstraße, Berlin Alexanderplatz, Berlin Ostbahnhof and Berlin-Karlshorst before arriving at Berlin Schönefeld Airport.

It’s important to bear in mind that the RE7 and Airport Express only signal the primary route to and from the Hauptbahnhof. If you’re travelling to Charlottenburg or Wannsee, be sure to check before boarding the train if it does indeed stop here. Departures to Wannsee, for example, occur only once every hour.

The route of the RB14 Train is almost identical, with the only difference being it stops at Spandau rather than Wannsee. As is the case with the RE7, it’s just as important to check your route before you board the train.

If you’re travelling to the east or north-east of the city, the best option is to take the airport transfer with the S-Bahn line S9. You should also take the S9 if you’re looking to connect to the Ringbahn (suburban train line ring).

The S9 route goes to and from Schönefeld Airport, stopping at Baumschulenweg and terminating at Pankow in the north-east of the city. From Treptower Park station through to Schönhauser Allee station the S9 follows the same route as the Berlin S-Bahn Ring, to which you can transfer at any point and continue on to other parts of the city.

Direct connections to and from Schönefeld Airport using the S9 only run on weekdays – from 05:00to 21:00, every 20 to 30 minutes. On weekends, as well as in the very early morning or late evening, the S9 to and from Schönefeld Airport ONLY runs to and from Treptower Park station. If you’re travelling from here during these times, you’ll need to change to the Ringbahn. You can almost always make your connection on the same platform or the platform opposite.

To travel with the S9, you’ll need to purchase a ticket for zones ABC. The price for a single ticket is 3€.

It’s also possible to use the public transport bus lines to reach Schönefeld Airport, or from the airport into the city centre. The bus routes often only cover short distances, meaning you’ll have to transfer frequently to reach your destination. For those looking to get from the airport to Neukölln, or to the area around Hermannplatz, an airport transfer with public transport buses is the way to go.

For line 171, you should also purchase a ticket for zones ABC. The price for a single ride is 3€.

For those looking for a quick and easy transfer to U-Bahn line U7, take the X7 Bus/JetExpress Bus, which travels non-stop from Terminal A to U-Bahn station Rudow.

For anyone needing to head to the airport at night, or whose plane arrives at Schönefeld in the early hours of the morning, there’s the Night Bus N7. There are plenty of stops along this route and the bus travels more or less straight through the city, terminating at Spandau.

Again, if you choose an airport transfer by bus you should purchase a ticket valid for zones ABC.