Spending just a few days in Paris is enough to really whet your appetite for the culture, food and history of the City of Light. Also known as the City of Love, there are plenty of off-the-beaten-track spots to spend time with loved ones, as well as the iconic Paris museums and attractions to experience. From cafés to cabarets and boulevards to bird’s-eye views, your trip to Paris will be far from average. 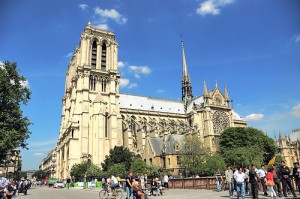 Your first day in Paris should be all about visiting the icons of the city you’ve heard so much about. Start the day with breakfast at Café le Petit Pont with perfect views of the Notre Dame cathedral. After a breakfast of coffee and pastries, stroll over the Pont au Double Bridge to cross the Seine and reach Notre Dame itself, world-famous for its French Gothic architecture and events that have taken place there throughout history. These range from Henry VI of England being crowned King of France in the 1400s, to the canonisation of Joan of Arc in the 1920s. The cathedral is open to visitors all year round.

You’ll get a real sense of Paris if you stroll the streets rather than taking public transport where possible. From Notre Dame, head back across the river and have a look at the nearby Boulevard Saint-Germain, well-known for its shopping opportunities and cafés. After browsing in a few shops, head over to the Sorbonne to soak up the historical building in the Latin Quarter you’ll recognise from iconic Paris photographs. A short stroll further still and you’ll find yourself in Jardin du Luxembourg, the stunning second-largest park in the city. Home to the Luxembourg Palace, extensive and colourful gardens and landscaped views of the Pantheon, walking around is peaceful and scenic.

Not far from Jardin du Luxembourg are small backstreets further off the tourist trails. Have lunch at La Cerisaie, a tiny husband and wife operation serving traditional sun-drenched food inspired by their southern France roots. The restaurant offers a prix fixe as well as an a la carte menu with specials, and dishes such as foie gras, creamy chestnut soups and game pies are common fixtures.

Let your lunch go down and take the Metro to one of the stops near Avenue des Champs-Élysées. Home to a number of the big sights in Paris, this picturesque tree-lined street is perfect for a gentle stroll. Take in the Place de la Concorde and the Arc de Triomphe, a monument to those who have died for France in historical battles. Climb the stairs to the top for some impressive views of the surrounding area. The Élysée Palace is nearby on Rue du Faubourg Saint-Honoré and is the official residence of the French President. 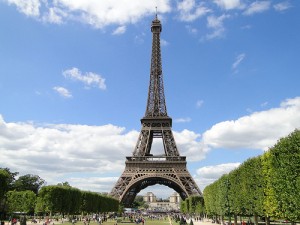 You can’t visit the City of Love without a trip up the Eiffel Tower and there’s no better activity to undertake before your first evening in Paris. Erected in 1889, it used to be the tallest structure in the world. Nowadays, it’s still the tallest structure in Paris, with the upper viewing platform 279 metres high. For those who like celebrity chefs, Alan Ducasse owns the restaurant on the Eiffel Tower’s second floor. At its foot is the Champ de Mars, a long and largely symmetrical park. It used to be a training ground for the adjacent military academy, but nowadays attracts more picnickers and tourists interested in the more recently erected Monument to Peace. 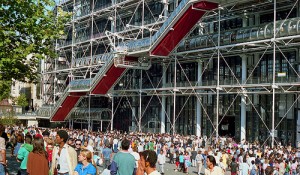 End your day at the Pompidou Centre, a huge structure you can’t miss with its external pipework and garish colours. The art-minded will enjoy a look at the Museum of Modern Art housed inside, said to be one of the most significant art collections in the world and a hub for multiple expressions of French art and culture. As well as being a centre for art, the Pompidou Centre is also home to a free, general purpose public library – the first of its kind in Paris.

A much lesser-known fact about the Pompidou Centre is Le Georges, a bar and French fusion restaurant on the rooftop of the building. The fusion food is carefully constructed, with plenty of foie gras on the menu as well as fresh fish and light lemon tarts for dessert. Prices are steep, but the privileged views over a night-time Paris make it worth the splash-out. Remember to book in advance.